Advisor to the Board

Mr. Upendra Kamath H.S. is a very Senior banker, having more than 43 years of experience in the field of Banking.

Having joined as a Probationary Officer in Union Bank of India in 1973, he has worked in various capacities. He became the Executive Director of Canara Bank in March 2009. Thereafter he was elevated to the position of Chairman & Managing Director of Vijaya Bank on 1st April 2011. During his tenure in Vijaya, Bank, Mr. Kamath was instrumental in the all round development of the bank.

Mr. Kamath has also served as the Managing Director & Chief Executive Officer of Tamilnad Mercantile Bank Ltd. from July 2014 till May 2017.

Dr. Nandlal L. Sarda was a Professor in the Department of Computer Science and Engineering at IIT Mumbai (Bombay). He received his Master's (M.Tech.) and PhD degrees from IIT Bombay, and joined as faculty at IIT Bombay, where he is teaching since 1972. He was a Visiting Associate Professor at University of New Brunswick, Canada from 1986 to 1988. He was Head of the Computer Science & Engineering Department at IIT Bombay from 1994 to 1997. He was Head of Shailesh J. Mehta School of Management from Aug. 2006 till Feb. 2007.

He was Dean of Academic Programmes, IIT Bombay, from October 2001 to September 2004.. In this capacity, he coordinated with IIT's Senate and its various Academic departments for creating, revising, operationalizing and supervising IIT's academic programmes.

He served as Professor-in-Charge of Innovation and Entrepreneurship, from October 2004 to Feb. 2006, in which role he coordinated with the Society for Innovation and Entrepreneurship (SINE) hosted by IIT Bombay to encourage and actively facilitate IITB's faculty and students to convert intellectual property developed by them into business ventures.

He continued at IIT Bombay as Emeritus Fellow until April 2018 after his super-annuation in June 2013. He is presently a Visiting Professor in Computer Sci and Eng Department at IIT Dharwad.

His main research interests are in the areas of Database Systems and Software Engineering. He has published widely in international journals and conferences. He has focused in the last few years on the research issues in Database Modeling, Geo-spatial and Temporal databases, data warehousing (that includes metadata integration from multiple sources), and ontology-based schema integration. He has participated in many national and international conferences in the capacity of Programme Committee chair/member, invited speaker, etc. He was the Programme Co-chair of VLDB'96, a premier international database conference, which was held in Mumbai in 1996. He has also served on the editorial board of a few international journals. He was honoured as Fellow of Computer Society of India at its convention in November 2006 for his sustained contributions to CSI's activities.

He is closely associated with many companies and government institutions as a consultant, offering advice in planning, selection, implementation and evaluation of information technology solutions. He is on Technical Advisory committees of National Payments Corporation of India (NPCI), NSE (National Stock Exchange), NSDL, and CCIL among others. He served as Director on the Board of Directors of Union Bank of India, a large public sector Bank from June 2003 to June 2009, and Andhra Bank from 2011 to 2014. He was also Director on the Boards of Clearing Corporation of India, and continues to be on the Boards of Ujjivan Small Finance Bank, Cybertech Systems and Software Ltd and eMudhra Ltd. 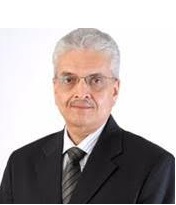 In his professional experience with the Firm of 39 years, he has dealt with numerous multinationals, public sector enterprises, banking and financial enterprises, mutual funds, Companies engaged in the field of manufacturing, services, real estate, hospitality, engineering, energy, infrastructure, etc. He has in-depth knowledge and exposure in the fields of accounting, auditing, Companies Act and related areas, corporate governance, compliance etc.